We advocate for Local Control of Wireless Telecom & Wireline Broadband

The solution is BIG DATA via Fiber Optic wirelines — direct to homes — and only small data via wireless. This is how your town can hit the Sweet Spot.

Towns Can Maintain Local Control over the Placement, Construction & Operations of Wireless Telecom Facilities (WTFs) — of Any G

Are you looking for some quick help? Then go here.

The FCC-attempted, so-called “small” Wireless Telecommunications Facilities (sWTFs) Agenda is crumbling before our very eyes. Local governments can step up to the plate and pass intelligent, protective local ordinances to integrate broadband service into their communities in ways that best meet their local needs.

“The greatest polluting element in the earth’s environment is the proliferation of electromagnetic radiation. I consider that to be a far greater threat on a global scale than warming, or the increase of chemical elements in the environment.”

“All life pulsates in time to the Earth and our artificial electromagnetic radiation causes abnormal reactions in all organisms. Increasing EMR-pollution could set in motion irreversible changes leading to our extinction”

Do you want a cell tower in front of your home?

We don’t. If you agree, please help us convince our Federal Legislators to cancel FCC Orders 18-111 & 18-133 via House Bill, HR.530 or Senate Bill S.2012 bill that both that FCC Orders in 18-111 and 18-133 “shall have no force or effect”. These bills would provide effective oversight of the FCC and preserve the rights of states and local communities over the placement, construction and modification of so-called “small” Wireless Telecommunications Facilities (sWTFs) — a misnomer, once one considers the maximum Effective Radiated Power that such sWTF antennas can output.

We also aim to convince our legislators to oppose HR.7236, the Radiofrequency Radiation Site Safety Information Act and to significantly amend S.1699, the Streamline Small Cell Deployment Act, which updates the 1996 Telecommuncations Act in ways that bestows even more gifts to Big Telecom. As written, FCC 17-79 and S.3157 would allow Telecom companies to place a dense network of high-intensity 4G and 5G microwave radiating cellular antennas in front of homes, across America. S.3157 and the premature implementation of S.1699 by the FCC, would severely reduce local revenues, shorten review times for applications and curtail local control over siting of cell towers.

Are cell towers next to homes even necessary for 5G?

No, they are not, because 5G antennas can be collocated on Macro Cell Towers that already have 4G antennas. In June, 2018, Lowell McAdam, CEO of Verizon stated: “We have now busted the myth that 5G has to be line-of-sight. It does not. We busted the myth that foliage will shut 5G down . . . that does not happen. And the 200 feet from a home? We are now designing the network for over 2,000 feet from transmitter to receiver.” 5G antennas can be installed on Macro Cell Towers, as can be seen here.

What’s wrong with living next to a cell tower?

Cell towers in residential neighborhoods would also create an access barrier to the homes and communities of Americans with Electromagnetic Sensitivity (EMS), an environmentally-induced medical illness that can be caused by RF microwave radiation exposures. These Americans (estimated to be 25,000,000 Americans and growing) with Federally-recognized ADA disability rights, would be barred from accessing public spaces and could be forced to move from their homes.

Our Town, Our Choice is raising $50,000 to fund a professional lobbying effort, based in Washington, DC to oppose Federal legislation and FCC regulations that would preempt local authority over the siting of so-called “small” Wireless Telecommunications Facilities (sWTFs) in residential areas. Such legislation and regulations would allow Big Telecom to deploy powerful, Close Proximity Microwave Radiation Antennas (CPMRAs) and additional equipment (up to 28 cubic feet, per FCC WT-Docket 17-79 and US Senate bill S.1699) on utility poles and light poles, as close as 6 to 12 feet from homes. The legislation and regulations would allow this to happen nearly everywhere, even if your town does not want this Telecom invasion.

We are funding a Washington, DC-based lobbying effort. We completed six weeks of full-time lobbying at the US Senate and House and at the Federal Communications Commission in Fall 2018 and another six weeks in Jan/Feb 2019.

Our Town, Our Choice is a lobby-funding group and not a 501(c)(3) organization, therefore, your donation will not be tax deductible.

Clicking the Donate button will take you to a secure page at https://donorbox.org to complete your donation by credit card or bank transfer. If you prefer to mail a check, please email us for mailing instructions.

Go to My Street, My Choice!

Go to Scientists for Wired Technology

Go to Physycians for Safe Technology 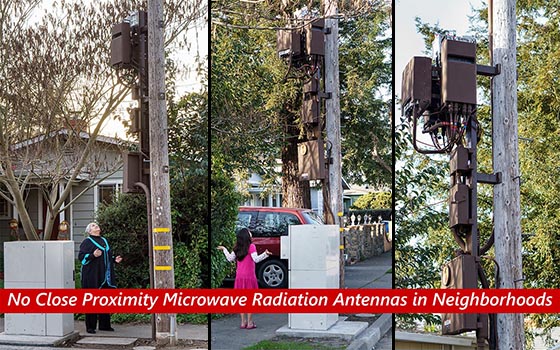 So-called “Small Cells” are actually Close Proximity Microwave Radiation Antennas (CPMRAs) placed 15 to 50 feet from homes. CPMRAs may be as imposing and unsightly, as this 4G facility, shown above. After a homebuyer learned that a CPMRA was planned for the utility pole adjacent to this Sonoma, CA home she had contracted to purchase, she canceled the deal and walked away. The owner had to reduce his price by $150,000. After six months on the market, the house has still not sold. Similar property value losses are occurring in other areas.

It’s urgent that we raise funds to assist our DC-based lobbying effort. S.1699 has bi-partisan support and currently faces little opposition. It could slip through the Senate via unanimous consent, appear in the House briefly and get attached to a spending bill — without any debate or roll-call votes specific to S.1699. This would wipe out nearly all the protective ordinances already passed by forward-looking cities.

The Utility or light pole near your home could be next. If you don’t want a cell phone tower in front of your home, please consider donating $125, $250, $500 or more today — here.

We Need Fiber to the Home — Not More Wireless

Fiber to the Home (FTTH) is a far superior broadband choice. Title II-regulated fiber offers high speed broadband, at reasonable prices, and with uncapped data. Most importantly, fiber preserves actual broadband choice. With fiber, one can use either wireless (Wi-Fi) or wired (Ethernet cords) in our homes.

Fiber to the Home — without “Small Cells” — is the sweet spot: high-speed, affordable wired broadband for all — with just enough wireless in neighborhoods for mobile calls.

Our Town, Our Choice is raising $50,000 to fund a professional lobbying effort based in Washington, DC to oppose Federal legislation and FCC regulations that would preempt local authority over the siting of so-called “small” Wireless Telecommunications Facilities in residential areas.

Senior advocates from both coasts with strong track records of results have formed Our Town, Our Choice to raise funds for a Washington, DC lobbying effort to:

We are working hard to preserve local rights to oppose Wireless Cell Antennas near where people live, sleep and heal.

For more information, please email Our Town, Our Choice: donate@ourtownourchoice.org